This is a transcription of part nine of our video series, Investing Mortgage Notes. In this video, we discuss some final thoughts on mortgage notes and your goals for investing in them.

You’ve made it. This is the final episode of our series on investing in private mortgage notes. You’ve learned quite a bit if you’ve watched everything. We’ve presented a lot of material here and I applaud you for your patience and your tenacity. We like to invest in these notes. I actually think it’s a lot of fun. There’s a profit to be made. This is not a get rich quick scheme by any means. What a lot of people like to say is this is a good way to get rich slowly as opposed to fast, and I wholly agree with that. If you’re investing in nonperforming notes or something of that sort and you happen to stumble upon the extra good investment, then perhaps you will get rich quick, but I tend to err on the more conservative side and tell people that it’s a good way to build equity and retirement over the long term. 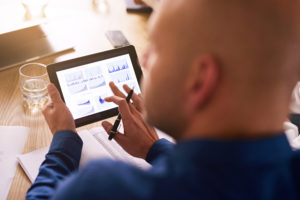 Portable computer tablet being used by a caucasian male business executive during a board meeting to view live analysis of the company’s investment portfolio.

These investments are a good way in their stability to compensate for slowdowns in the market. If you are somebody who’s commissioned-based or maybe largely dependent on sales for real estate or anything like that, you’re going to have some downturns, so it can’t hurt to have an extra hundred thousand … or not hundred thousand, an extra thousand, two thousand, three thousand dollars, whatever it is a month coming in from one of these investments or several of these investments to even out your cashflow. I think you have to remember that if you can direct invest with them through a self-directed IRA, either a Roth or a normal IRA, that the return to you is tax-free, so you have to compare that to a taxable return. If somebody says, well, they’re giving you 12%, you have to compare that to what they were going to get after they pay tax. If they’re in the 30% tax bracket, then they’re probably only going to be making about 9% or 10%, somewhere in there.

Want to learn more about how to start investing? Check out our guide.

Also, if you look at these compared to hard money loans, a lot of people will brag that they’re getting a 12% or 10% on their hard money loans, and hard money loans are quite often six to eight months, quite often four months. If you look at a hard money loan and your money is actually only out, in other words, it’s a eight-month turnaround before you give the developer or the flipper your money and get it back eight months from then and you get a 12% return, that’s great, but usually flippers can’t keep their money active consistently, meaning that once they get a deal done, it takes them a while to get a new deal going. They’ve got other investors already lined up for that, so it may take you three or four months to get into a new flippable investment.

If that’s the case and you look at your investment that on an annual basis, then you really are only going to be getting about an 8% return annually because your money’s just sitting for some time, so that’s another thing to think about. And that applies to anything, whether it’s stocks and bonds or mortgage investments or anything of that sort. I’ve heard a number of different estimates, but the self-directed IRA industry believes that there’s over $77 billion just sitting in people’s accounts uninvested, losing money. Not only are they losing the opportunity cost of what they could be making, but they’re losing through depreciation of their money. So if the consumer price index is increasing 3% per year and they haven’t invested it, then they’ve actually lost 3% on that money, so you’re far better off to keep it active. Even if it’s something that isn’t making the very highest return that you think you can get, you’re far better off to keep it active and moving because you’re going to get a return. It’s somewhat comparable to the a race between the tortoise and the hare. The hare jumps all around, gets high returns, does very well, but the steady Eddie tortoise who has invested perhaps and running the race consistently is the one who wins the day.

Have questions about any of the terms in this article? Check out our glossary.

My goal in helping everybody do this is to help them gain some financial freedom. I think this is an excellent way to do it. I’m doing it for myself. I’m have a number of notes and as I make more profits in this, I buy more notes, just so you just so you know, because these do pay off and they do roll over from time to time, but it’s a great way to have passive income, and even if you do it on a cash basis, if you’re in the thirties 30% tax bracket, you’re only paying 20% on these passive investments, so that’s something to to think about.

So all of these are good reasons for investing in private mortgage notes. I would love to help you out with it if I can, and if not, I’ll at least also be glad to give you some advice and some different alternatives and ideas, so please don’t hesitate to call me. This is Richard Thornton. I can be reached at 800-508-5212 or fill out our online contact form. Thanks for joining us and happy investments.